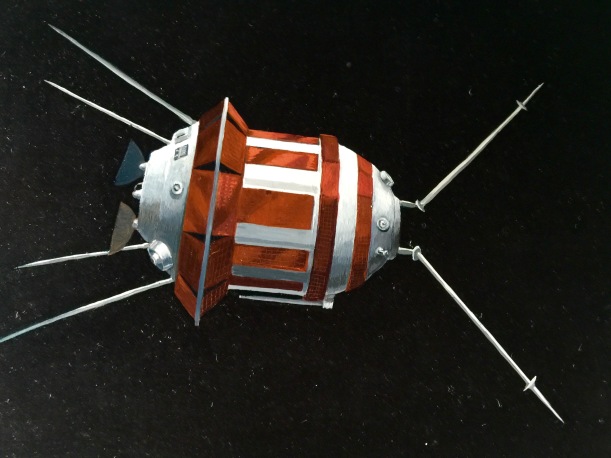 It’s been great sharing our space/art interests together this past month. James Dean and I have met and talked with lots of wonderful, interested visitors from all over, telling us their stories of personal involvement with the Space Program.  Many had little idea that NASA, from early on, had such an interest in artistic interpretation as to collaborate with the National Gallery of Art, to promote and collect art about America’s foray into outer space.

It was lovely seeing Peter Jacob, chief curator at Air and Space, last Sunday at our Splashdown reception, who reminded me that Telstar is now on view at the museum on the National Mall. Can’t wait to see it! 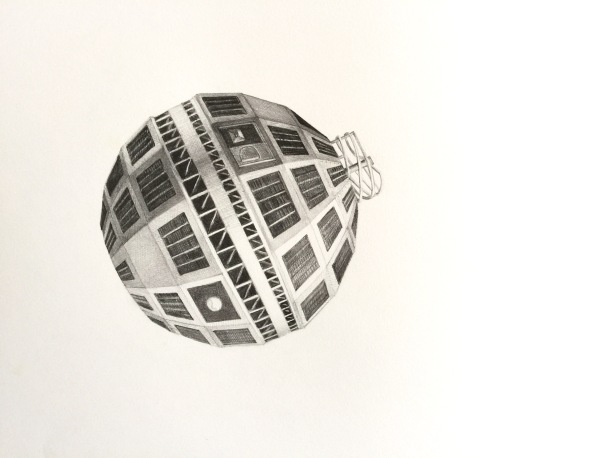 My drawing of Telstar, detail, graphite on paper, 1997.

A couple of other works…

As the exhibition comes to a close, I’d like to thank a few people for helping make our exhibition a success – Barbara Muth, and Alison Sigethy for helping keep the doors open, as well as with the Splashdown Reception and Open House, and Abbey McClain and Daniel Guzman for helping get the word out.

If you haven’t been by yet, we’re closing on Sunday afternoon.

I happen to share a studio with a gentleman with quite a storied career. From the early 1960’s through the early 1970’s, James Dean was the Director of the NASA Art Program, orchestrating the amassing of a remarkable collection of art, (documented in the book “Eyewitness to Space”) now residing with the National Air and Space Museum where he subsequently worked as the Curator of Art. He recently told me the story of how the sculpture, “Ad Astra”, by Richard Lippold, in front of the Museum of Air and Space, came to be where it is.

I would not have expected that there would be no more bureaucracy involved than one guy standing on the sidewalk with a magic marker and placing an X where he thought it ought to go, but in 1976, the Arts Curator stretched his arms out as he stood in front of the museum, and figured somewhere along the middle, with a good and proper view of the National Gallery of Art straight out in front. He then bent down and made a mark where he thought the signature sculpture should stand.

Dean then told me about how he helped the arts committee decide how the new piece would look in the auspicious spot it was to be placed. After the deciders tentatively approved the maquette of the proposed piece, James acquired a large red weather balloon which was then tethered by ropes, held steady by helpful staff janitors to hold aloft a 100 foot cord with which to visualize the proposed monument. One hundred feet high was the limit set by the city, so that no building or sculpture would be allowed higher.

The wind not withstanding, the helpers were able to hold the crimson orb suspended at the appropriate height for the city officials and arts professionals to stand and observe, then walk to several distances across the National Mall, to ascertain whether the proposal would be deemed appropriate. When they reached the opposite side, in front of the National Gallery of Art, they paused to discuss. At that moment, the balloon unexpectedly burst, showering powder and debris, along with the ropes, and 100 foot cord, onto the head of the unsuspecting art director.

When the group returned with their verdict, they had approved the design, wondering how James had managed to burst the balloon just as they had given the okay. He was much relieved.

And on the opposite wall in Studio 306, Torpedo Factory:

Photograph by the illustrious James Dean.