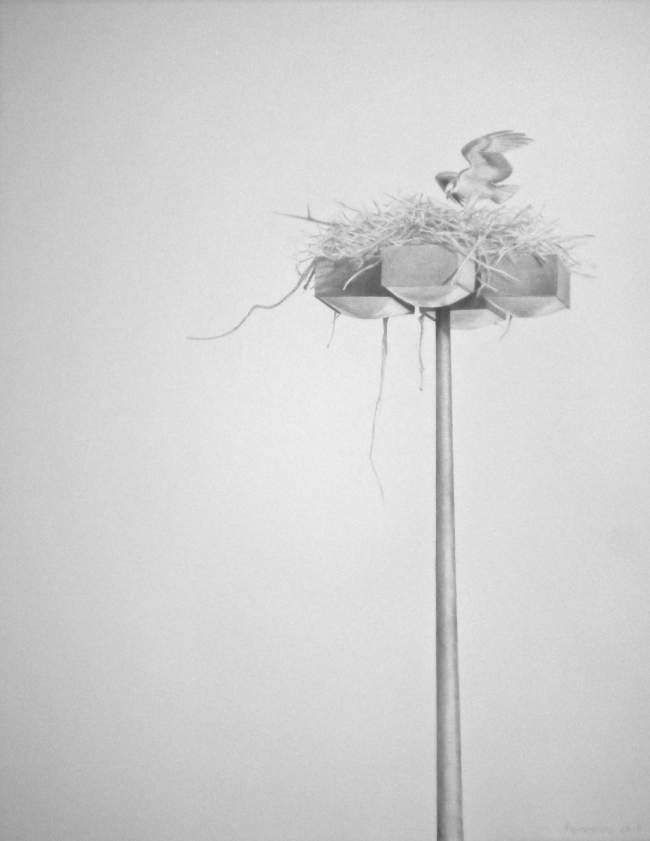 Nature, in many respects, has been conquered, tamed and degraded by the mass onslaught of human activity. Where we once viewed ourselves as small in the face of the sublime limitlessness of nature, we find our own heavy footprint in millions of paths already taken. With every new development, every new invention, every new industry, we assume with vain certainty that we are the center of the human-made world.

Yet we, the “conscious animal”, remain largely unaware of the myriad of ways other creatures observe, manipulate, and use us, working around our best efforts to contain them. The eyes of many organisms are watching beyond the glass. 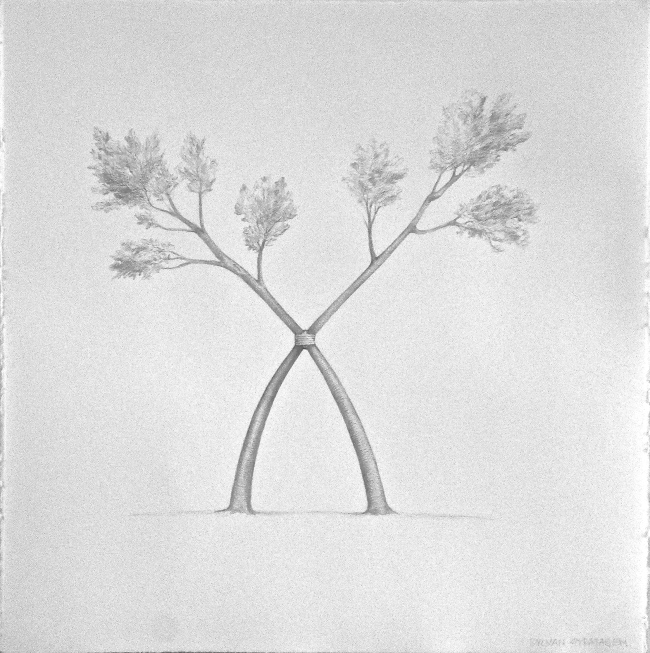 It’s of two saplings being purposefully bound together so they will grow as one.

For some reason, it reminds me of this: 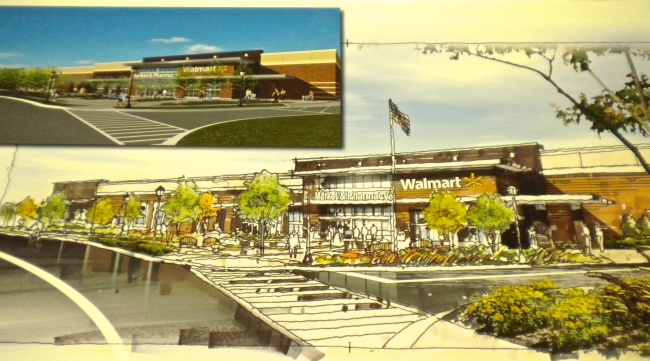 Tuesday, April 8, in Upper Marlboro, the last zoning hearing takes place in which the board will likely approve plans to build a 100,000+ square foot Wal-mart next door to the public Montessori elementary school where I was hoping to send my son in the fall. I have already written the county zoning examiner outlining my deep concerns with such a flawed plan in relation to the kind of educational environment we ought to be providing our children. This writing concerns a different topic – a modernist civic structure and a post-modernist, post-civic big box store plan.

Listening to the testimony of Wal-mart’s architect at the previous hearing on March 19 was vexing. Mr. Ronis, of Perkowitz + Ruth Architects, presented a series of drawings showing how the new Wal-mart would be designed to reference the vernacular architecture of the Oxon Hill area, using the John Hanson Montessori School as it’s primary model.

Placing this Wal-mart design up against an original modernist structure invites direct comparison to the visions of community and society behind what each one may signify. 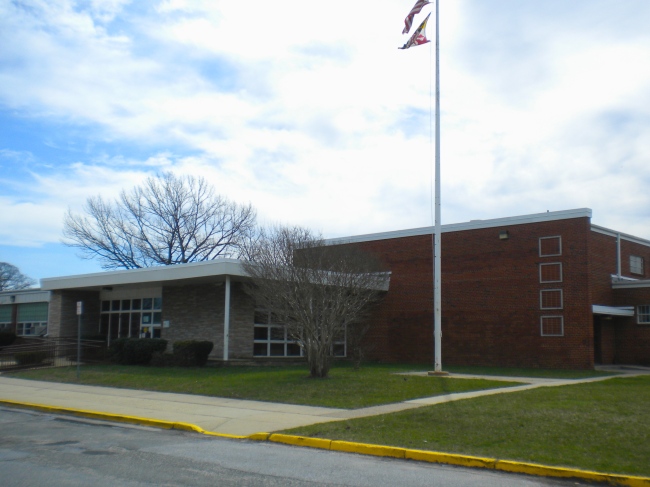 The JHMS, built in the 1950’s, is an example of classic mid-20th century civic architecture exemplifying modernist ideals of form following function, quality and economy of materials, anti-historicism,  lack of surface ornamentation, as well as an overall layout that promotes social and community interaction. It was built during a time of post-war optimism where belief in progress, social responsibility, and trust in the democratic process, made the future seem bright for most Americans; when it was believed that architecture could transform peoples’ lives, therefore society, for the better.

Following the modernist ethos, the elementary school demonstrates a balanced geometry of glass brick, walls of functional windows, flagstone, steel and brick; where students are provided simple, naturally lit classrooms and spacious halls surrounding a central courtyard garden. It is a simple, utilitarian design that has worked for thousands of children for more than half a century. 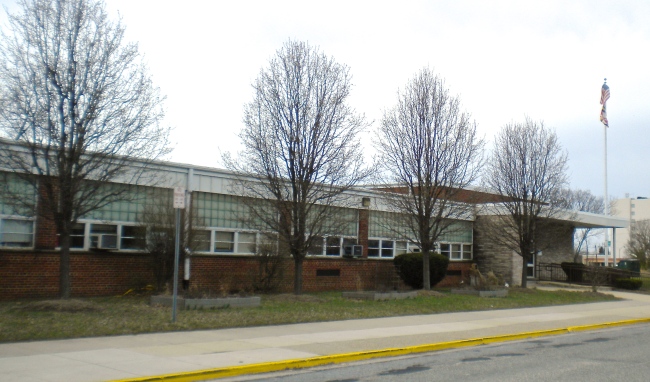 Wal-mart’s design proposal deals in a nostalgic optimism by mimicking the JHMS design while creating its own hermetically sealed world of lowest-common-denominator commerce.  It references a history the ethics of which it actively works to undermine. Wal-mart’s primary concern is profit-making by cutting costs at every opportunity. They are notorious for putting their neighbors out of business by undercutting prices, and where their workers are often on public assistance for lack of adequate wages and benefits. The net result is a hollowing out of communities where crime thrives, all in the name of Lower Prices. Wal-mart has little actual interest in any of the places it builds beyond what it can financially extract. 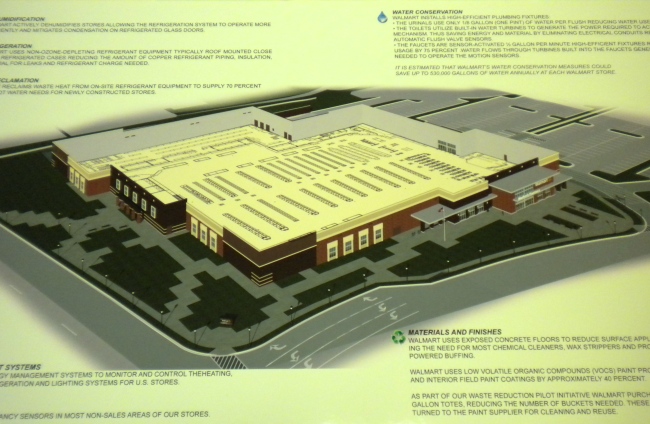 During the course of the March 19th hearing, Wal-mart was frequently referred to as a “department store.” Unlike any traditional department store with fashionably dressed window displays and multiple convenient entrances, Wal-mart, (and any big box retailer, for that matter) favors crowd control in which there is and always will be only one entrance, as their customers are simultaneously deemed potential shoplifters.

What the architect referred to as “fenestration” were not actually windows, but inexpensive decoration to break up the monotony of what would otherwise be hundreds of linear feet of continuous brick wall. While one might see the importance of mitigating such featureless uniformity, the visual suggestion of windows begs for the illuminating quality of the real thing.  Why can’t they put a few real windows like actual department stores have? Modernist aesthetics would require it.

The plan visually resembles the school, ostensibly to “fit in” with the surrounding buildings, yet its faux façade is nearly twice its one story height, a profile which would doubtless be more easily seen from the main road, while overwhelming structures nearby.

The design has been already been reworked, in response to Prince George’s County Planning pressure to create a more walkable neighborhood, by placing the building adjacent to the primary road, Oxon Hill, with the parking lot off of a new secondary road, Clipper Way. In the redesign, access to the only entrance to the box store will be from the parking lot, on the opposite side from the primary road where most pedestrian traffic originates. Any notion that Wal-mart might diverge from crowd-control to accommodate a new urban design catering to pedestrian patrons entering from the primary road is unrealistic.

The one basic tenet of modernism that seems to have carried over into big box stores is that of functionality, the basic focus of which has shifted from primarily benefiting the people using the building, to primarily benefiting the profitability for owners. It is functionalism whose greatest purpose is to house vast amounts of stuff, to move payers in and around that stuff and to get them efficiently through the pay barrier.

Any real modernist worth his salt would have called these architects on the carpet for the false facade, the fake windows, and for ignoring the needs of the pedestrian patrons for more usable entrances, not to mention creating beautiful, workable, spaces which attempt to bring out the best in us as citizens, not only as consumers. If this is their answer to new urban design, it will see few if any new urbanites using it. But then that’s the point, isn’t it? Neither Wal-mart nor any big box retailer will change its business model because it would require them to think of the communities they inhabit as more than places to make money. 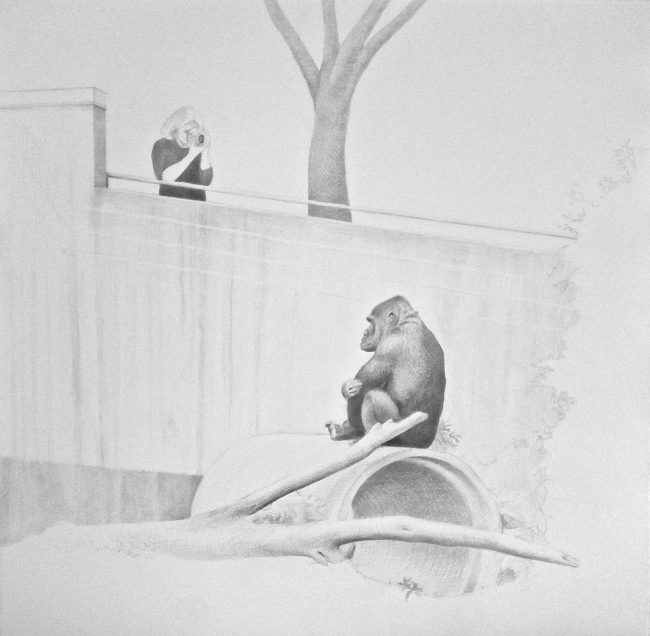 I often wonder what animals, particularly very intelligent animals, think of people looking at them all the time. What do they think about our interest? Are they stressed by it? Are they watching us as we watch them? I believe we are instinctively drawn to animals as much as they are instinctively fearful or wary of us. There is a dynamic tension between our gaze and their captivity that has always made me uncomfortable in zoos.